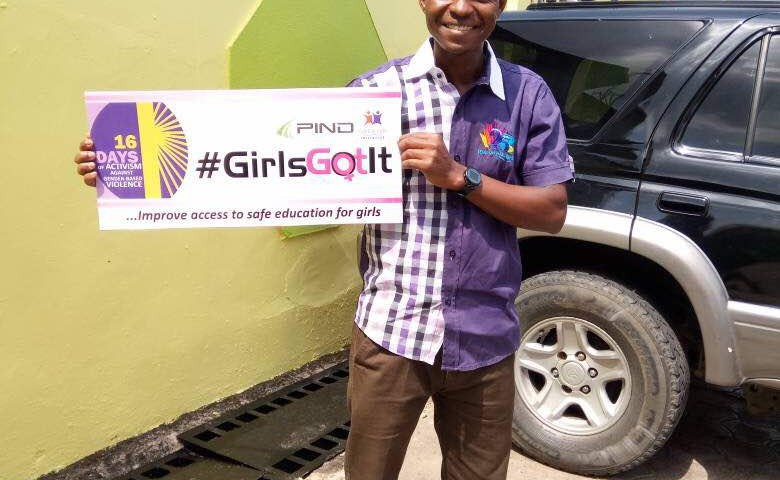 Greater Tomorrow Initiative, GTI with Funding from Foundation for Partnership Initiative in the Niger Delta, PIND will hold a 16 Days Activism Against Gender-Based Violence, 2017 Edition from the 29th November 2017 to 15th December 2017 with the theme, “From Peace in the Home to Peace in the Region: Promote access to safe education for the girl child in Akwa Ibom State (otherwise termed as #GirlsGotIt).”

Globally, the theme of the 2017 Campaign is “Together We Can End Gender Based Violence in Education!” The 2017 theme builds on the achievements of the 2016 campaign, when over 700 organizations in 92 countries campaigned around the theme of “From Peace in the Home to Peace in the World: Make Education Safe for All!” the goal for 2017 is to continue to build awareness of and advocate for an end to all forms of gender-based violence in education once and for all.

However, the 2017 16 Days of Activism Campaign places stronger emphasis than in recent years on the human rights framework. This portrays a refocused and renewed emphasis by the Lead Campaign Organization – Center for Women’s Global Leadership (CWGL) on using the human rights framework to campaign not only to raise awareness about gender-based violence, but also to eradicate it once and for all.

The 2017 campaign will restate the fact that Education is a fundamental human right of every citizen irrespective of gender. In the south which is home to Niger delta region, the Girl – child is relatively privileged and given the opportunity to education, but most times poverty stands as an obstacle which prevents them to gain full qualitative education and at other times it is the safety of the girl child that poses a threat to their education. In other cases, illiteracy is a challenge especially for those living in the rural areas. In this region, the key barriers facing girls receiving education include cost of education, distance to school, violence at school, gender norms, poverty and early marriage and pregnancy.

It is also worthy to note that when girls are out of school, it increases threats to certain things such as risky sexual relations, pressure to early marriage and children bearing, exploitative labor condition. Equally, once girls gain access to schools, they may experience both direct physical threats and subtler assaults on their confidence, self-esteem and identity in the journey to school which may be unsafe, since many girls experience harassment and physical attacks either on public transportation in urban areas or during their walk to school through bushy and lonely paths in rural areas. Although in Akwa Ibom state, free and compulsory education is practiced to promote access to education there still exists the problem of safe education – void of stigmatization, victimization, rape, lack of healthy environment, and parental and cultural barriers for the girl child.

The GTI 2017 16 Days Activism against gender-based violence otherwise known as Girls Got It project is designed to strengthen public awareness on increased access to safe education for all especially the Girl Child, secure commitments from relevant government stakeholders to ensure enforceable policies for safe girl child education in our communities and strengthen the capacity of relevant civil society groups to work with relevant government agencies in promoting the campaign to end gender-based violence in education for the girl child.

This year’s campaign as undertaken by GTI with funding from PIND will start with media advocacy and social marketing on the gender violence, followed by series of advocacy visits to relevant institutions that will bring about a town hall stakeholders forum and will end with an advocacy visit to the Akwa Ibom State House of Assembly to present our specific policy asks and resolutions from the town hall stakeholders summit.

16 days of activism against gender-based violence